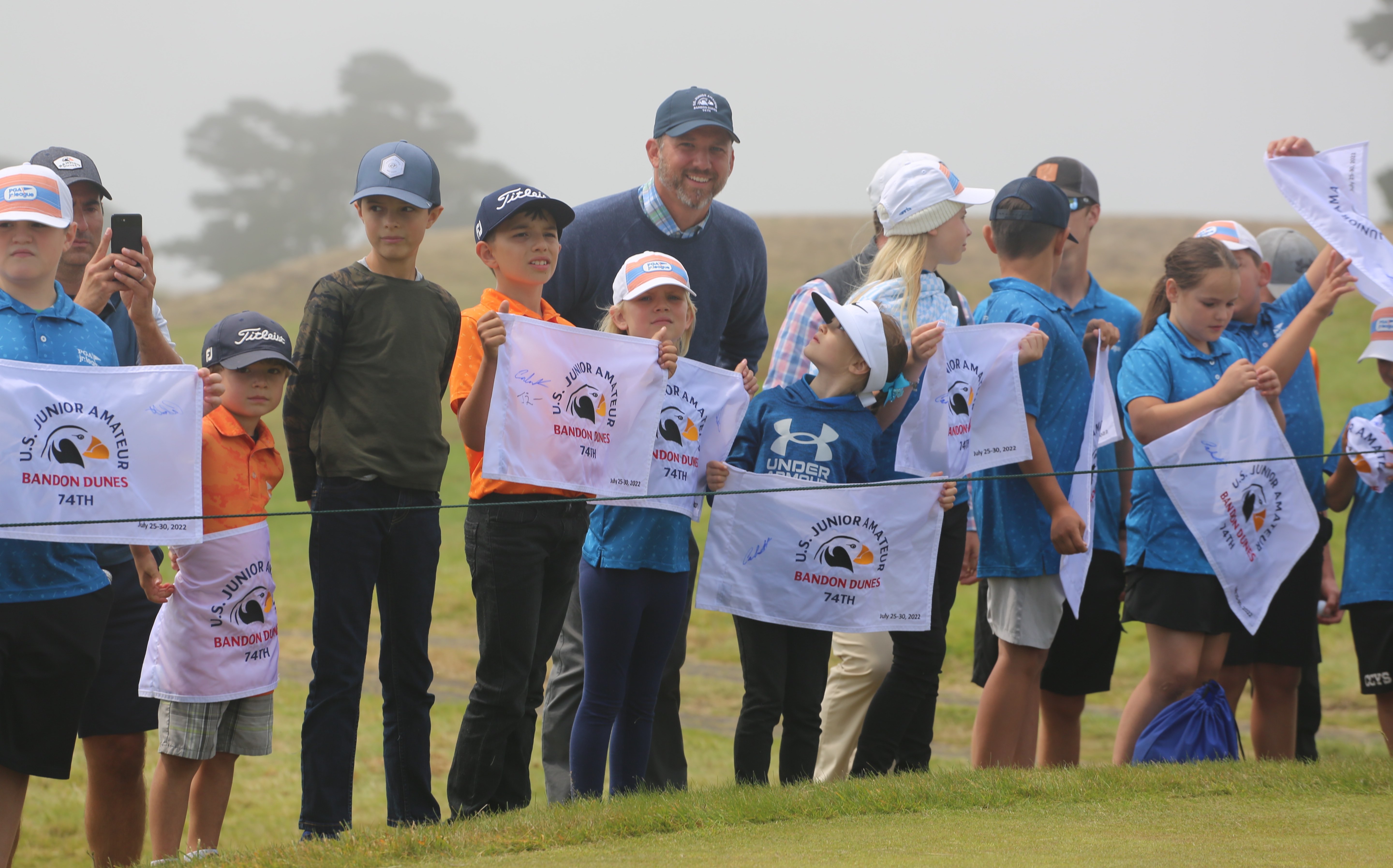 For many golfers, Bandon Dunes Golf Resort on Oregon’s pristine coastline holds a spot high on their bucket list. For 95 local kids and their families, it’s their connection to a beloved summertime tradition.

Bandon Dunes Director of Golf Scott Millhouser, PGA, has created a community-centered PGA Jr. League program at the renowned resort, which he’s run with full support from ownership, staff, assistants and interns since 2017. They offer both 13u (ages 6-13) and 17u teams (ages 14-17), and their registration is open to the public.

“I coach two teams, there’s another pro who coaches two and another who coaches three teams,” said Millhouser. “We have PGA Golf Management interns who help. Some of our hourly staff members even stay on the clock for practices in the evening. We have a culture of staff here who want to give back and who want to grow the game.”

Based on the program’s record-setting numbers this year, it’s clear Millhouser has found the key to success.

“We have great retention,” he said. “Families want us to do more, including a fall league. When we have the staff, we do it. As coaches we love it and want to see our teams do well, but it’s always all about the kids having fun. The team-based matchplay and scramble format is excellent.”

Millhouser prioritizes registration for the families of resort staff first before he lets word of mouth do the rest of the work. Even though he runs an in-house league, meaning practices and games can all take place on property, Bandon Dunes partners with nearby Coos Golf Club and Sunset Bay Golf Course (who don’t have PGA Jr. League programs) to bring teams there. The added facilities help families who are more centrally-located than the more isolated Bandon Dunes.

“The courses don’t charge for the kids, so they make money through cart fees, food and beverage, merchandise sales and more,” said Millhouser. “They recognize the benefit of having families and kids out. Some of our families have even joined those clubs, so they’ve seen that benefit in the long-run.”

Millhouser has also spent years working closely with Jane and Ed Metcalf of the Coquille Indian Tribe and their Southwestern Oregon Youth Golf Program, hosting complimentary golf clinics and camps and receiving donations from the tribe that help fund the PGA Jr. League program. Their funds have helped Bandon purchase everything from sets of golf clubs and other branded gifts to a special season-ending party with pizza and ice cream sandwiches. Most importantly, it keeps program costs low.

“We want to make it affordable and accessible to every child,” said Millhouser. “We tell employees that scholarships are available. We keep the focus on etiquette, sportsmanship, having fun and playing with friends.”

“We just tossed the invitation out there for them to join us for the final afternoon round,” said Millhouser. “A total of 35 players showed up! We gave them all a U.S. Junior Amateur pin flag and took them to watch Wenyi Ding and Caleb Surratt warmup. The kids were in awe and thought they were professional players. Wenyi and Caleb even signed autographs for them.

“We wanted to give them that fun experience and show them what could be,” he added. “If you work hard, this could be you! My daughter is 7 and has her autographed flag hanging above her bed. Families loved that unique experience.”

The bottom line? If one of the country’s premier resorts can offer PGA Jr. League, so can others.

“You just need someone who has a passion for junior golf and is willing to take that extra time,” said Millhouser. “Get your assistants involved, and interns are eager to help and learn. We’re not making a money play here; we’re just trying to grow the game. When these kids grow up, they’ll come back here and play. We’re looking down the road.”

“Jason and the whole team were great. A wonderful experience for my daughter, introducing her to the game of golf, getting the kids out and active in something that they can do for the rest of their lives. We greatly appreciate our coaches, and PGA Jr. League for offering this to our community.”

“Our daughter had never played golf before. Scott and Conner were amazing. She absolutely loves the game of golf and can’t wait for golf to start at her school, and she will be participating next year in the PGA Jr. League. Thank you so much!”

“Scott and the crew at Bandon Dunes are fantastic. They support the kids in a positive way, communicate with parents, and teach the game of golf in a successful way. Excited for next year!”

“We had the privilege of having both our boys participate in this program this year in Bandon, Oregon. They learned so much about the game, sportsmanship, and had a ton of fun! The coaches were patient and knowledgeable. One of the best sports programs our kids have been a part of!”

“We loved everything about it… Scott does an amazing job with the kids and leading the program. Scott said you'll be amazed how far the kids will come and he was spot on. My son loves to play now and golf is now our favorite thing to do together. They did just a great job. He loves the hat, bag and shirts and wears them with pride. Can't wait to play next year!”

Sharing the Story of Golf at Career Exploration Day