Golf Brings Hope for the Higginbothams

From tragedy to a triumphant return through golf for one Team Pennsylvania family
Happenings
October 7, 2022 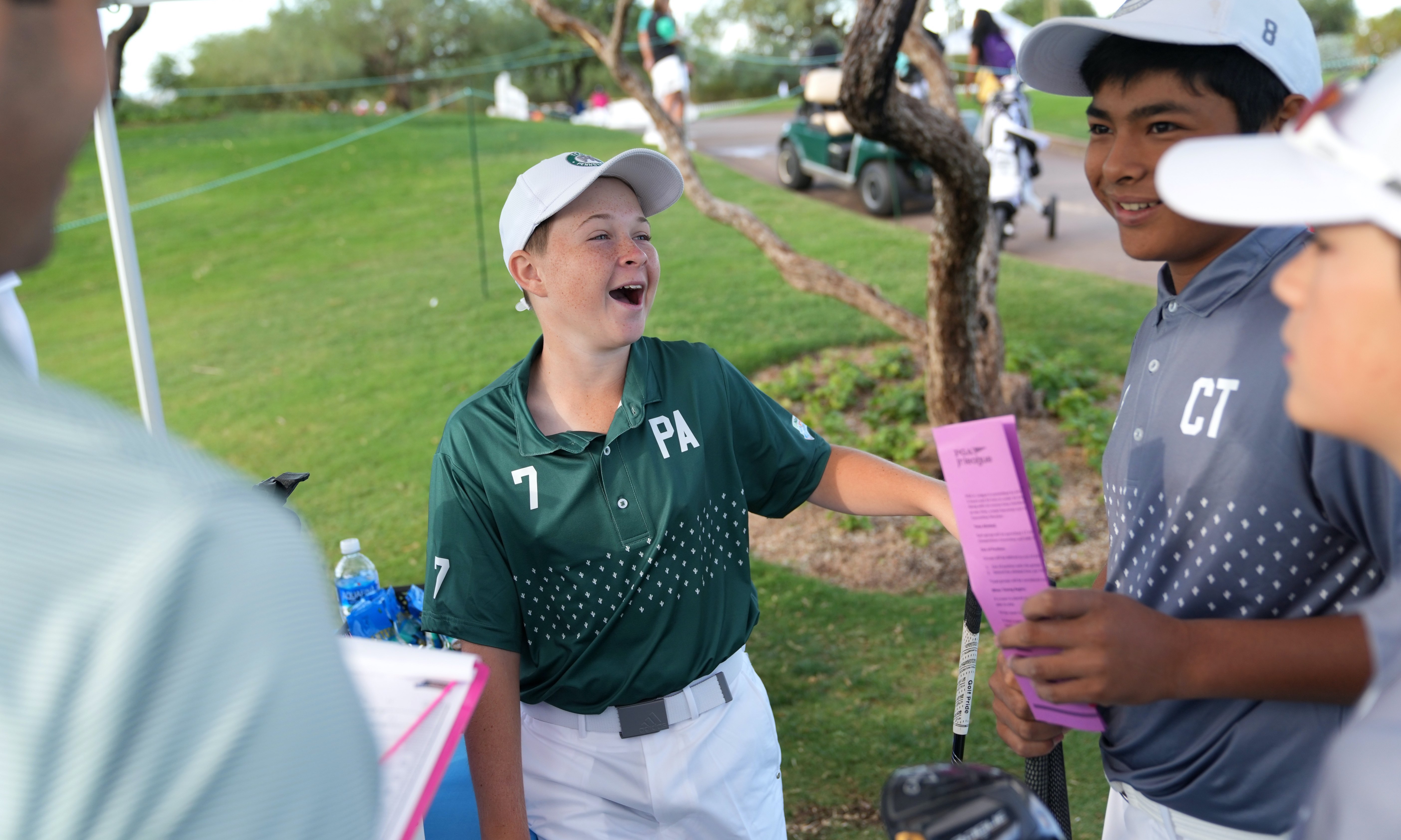 Golf Brings Hope for the Higginbothams

Roughly 2,000 miles and 48 hours later, the Higginbotham family was finally in the Arizona desert.

“We’ve never driven west of the Mississippi River,” said Jason Higginbotham, Assistant Coach of Team Pennsylvania. “We got to see the prairies in Oklahoma, and the plateaus and mountains in New Mexico were just stunning.”

This time around, they arrived hopeful and determined that their second planned trip to the National Car Rental PGA Jr. League Championship would include competing with Team Pennsylvania, rather than the tragedy that befell them in early October of last year.

Carson Higginbotham, 13, had every intention of representing Team Pennsylvania in their debut at the 2021 Championship. With his dad serving as the Team’s Assistant Coach––plus mom, sister and grandparents as his biggest cheerleaders and support system––PGA Jr. League had become a family affair.

Carson’s sister, 17-year-old Courtney, is a constant for Carson at his tournaments, giving him a good luck kiss before each one. Courtney is nonverbal autistic and epileptic, and because of this, the family has always lived extraordinarily carefully when it comes to germs.

“If anyone had so much as a sniffle, they did not come into our home,” said Jason. “COVID didn’t change our lives, because that’s how we’d always lived.”

Jason soon became the only family member to grocery shop or enter stores. His wife, Stacy, disinfected his clothes along with every single package or bag that came into their home.

“We were certainly worried about COVID, but we still lived our lives,” Jason added. “We continued to travel to golf tournaments, and my wife continued to wipe everything down.”

Following a round of golf with his best friend, Jason got the call a day later that his friend had tested positive for COVID-19. Jason immediately began quarantining, despite two negative at-home tests. A more accurate PCR test confirmed his diagnosis.

Carson and Stacy also tested positive and missed out on the 2021 Championship experience with friends and teammates. At home, Jason and Stacy had no choice but to recruit his elderly parents to take care of Courtney.

“When Stacy and Carson tested positive, that’s when I realized this was scary,” Jason said. “I didn’t want my parents getting sick, either.”

In just a matter of days, Jason went from symptomless to excruciatingly ill. He couldn’t keep down food, let alone water. He lost 25 pounds in the span of two weeks.

His parents became ill, too. Everyone received the monoclonal antibody infusion, but it wasn’t extremely effective for Jason or his mother––Carson’s Nona. Jason made a total of four trips to the emergency room. However, because he wasn’t presenting with typical COVID symptoms like coughing, he was discharged following two bags of IV fluids. The situation was dire, and no one could properly diagnose and treat him.

“I told my family I wasn’t going to make it,” explained Jason. “You’re going to have to take care of Courtney and move on without me.”

During this span of time, Nona was admitted to the hospital with difficulty breathing. For three days, she was fine. On her fourth night, she took a sudden turn for the worse, and Jason had to be wheeled to her bedside to say his goodbyes.

As he slowly recovered, it was a follow-up visit to his primary care physician that finally provided Jason with answers. His doctor reviewed Jason’s scans and said he had no doubt it was COVID-induced pneumonia.

“He pointed to the bottom of my lungs and showed me the haziness in the scan,” Jason said. “I never coughed one time. But because I’m a smaller guy already, and he said it put an immense amount of pressure on my diaphragm, which made me so sick. I was so close to dying.”

Golf was, understandably, put on the back burner for the Higginbothams. They took six months off from all activities to give them time to heal. Jason spent much of his time busy with the paperwork surrounding his mother’s death.

With spring came hope and renewal. Carson started competing again, and he was moving back up in the junior golf rankings with his impressive play. But he missed his Nona, who was a staple at each and every tournament he played.

“She was my biggest fan,” said Carson.

When Jason describes the family dynamic at golf tournaments, he’s truly describing a well-oiled machine. Because Courtney can’t fly, the family travels in their RV. His grandparents came to every tournament, watching the first nine holes while Stacy stayed back with Courtney. On the back nine, they switched.

“Losing her was an adjustment,” Jason said.

Arizona definitely was not the same without my best friend. Even though your dad isn’t too well, I ask you to keep yourself because that golf talent you have is a gift. I got us matching medallions because I thought that they were pretty cool, and when we make it to Arizona again next year we are definitely using those. So bud, be confident in yourself and keep pushing yourself. Always thinking about you and your awesome family.

It’s clear that golf — and more importantly, friends and family who act as teammates — have become a much-needed constant for the Higginbothams following their turbulent year.

“It means so much to get the boys out here,” Jason said. “To spread the word that it’s not just about golf… it’s about friendship.”