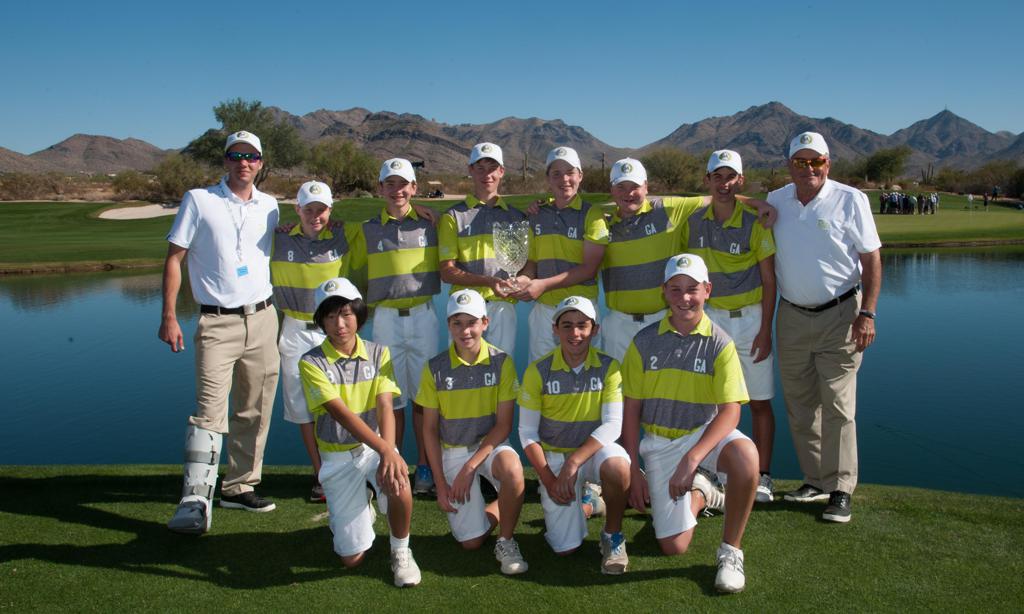 With Olympic gold medalist Kerri Strug looking on, undefeated Georgia vaulted to the mountain top of PGA Jr. League as national champions with a dramatic 6 ½ to 5 ½ victory over New Jersey at picturesque Grayhawk Golf Club in Scottsdale, Arizona.

The 6th PGA Jr. League Championship presented by National Car Rental showcased some amazing golf, as Georgia (Duluth) took an early 3 ½ to ½ lead through the first three holes and then held on tight, as New Jersey (Hillsborough) rallied back into serious contention.

This is the second title for a Georgia-based team (Atlanta in 2013).

With the final group watching from the tee on the ninth and final hole played (par 5, 465-yard Hole No. 18), the Georgia team of William Love, 14; Harris Barth, 13; and Strug’s nephew Lucas Jinglov, 13, earned a conceded birdie to seal a half-point, and clinch the match. Moments later, their Georgia teammates rushed the green, realizing they had secured a hard-fought national title.

“It was really fun,” said Jinglov. “The way we’ve been treated and everything that’s been done for us... It’s been a great experience overall.”

The Georgia team was on the green in two, before Barth and Love both missed their eagle putt, leaving a short putt for the Championship. Showing tremendous sportsmanship, the New Jersey team of Katie Li, 12; Megan Meng, 11; and Adrian Jordan, 11, conceded the match.

“It means a lot to the team,” said Team Georgia Captain Patrick McCrary, a PGA Professional at TPC Sugarloaf near Atlanta. “They worked hard to get here, and it’s been a long road. We couldn’t be more happy for these kids.”

The co-ed New Jersey trio simply played lights out golf to get New Jersey back into the match, with three straight birdies on the third, fourth and fifth holes played (Nos. 12, 13, 14). They equaled Georgia shot-for-shot from there on out.

Li made an electric 60-foot putt on No. 13 to match birdies with Georgia on the hole and put the entire tournament on its ear.

New Jersey got its first spark from the duo of Garrett Engle, 14, and Logan Paczewski, 13, who struck three birdies in a row to close out their match and capture a critical turnaround point.

The group behind them put on yet another show. New Jersey’s Joshua Ryan, who earlier in the week won the PGA Jr. League Championship presented by National Car Rental long-drive championship with a massive drive of 312 yards, made dramatic shot after dramatic shot.

On the sixth hole played (par 4, 378-yard Hole No. 15), Ryan and Georgia’s Ethan Gao showed why they were playing on the anchor leg, as they matched birdies, with mouth-dropping shots to the green – Ryan’s from approximately 180-yards out to within three-feet; and Gao’s from under the green and over the bunker from 70-yards away to 12 feet from glory.

The dual birdies prevented Georgia from clinching early and extended the match to the final hole.

The 80 boys and girls competing comprise eight Regional Champion teams from a record 42,000 kids who played in PGA Jr. League during 2017.

“There are so many sports that are more individually-focused, and it’s nice when there’s a team component particularly when you’re young,” said Strug from the gallery. “I think it’s good to have that ownership but understand the team component, too.”

The two teams in the Championship match appeared to be on a collision course to the finals all weekend of pool play, as both Georgia and New Jersey went undefeated, 3-0, in the Wanamaker and Ryder Divisions, respectively—and in impressive fashion. Georgia tallied a total of 29.5 of a possible 36 points in round-robin division play, while New Jersey amassed a stout 25.5 points.