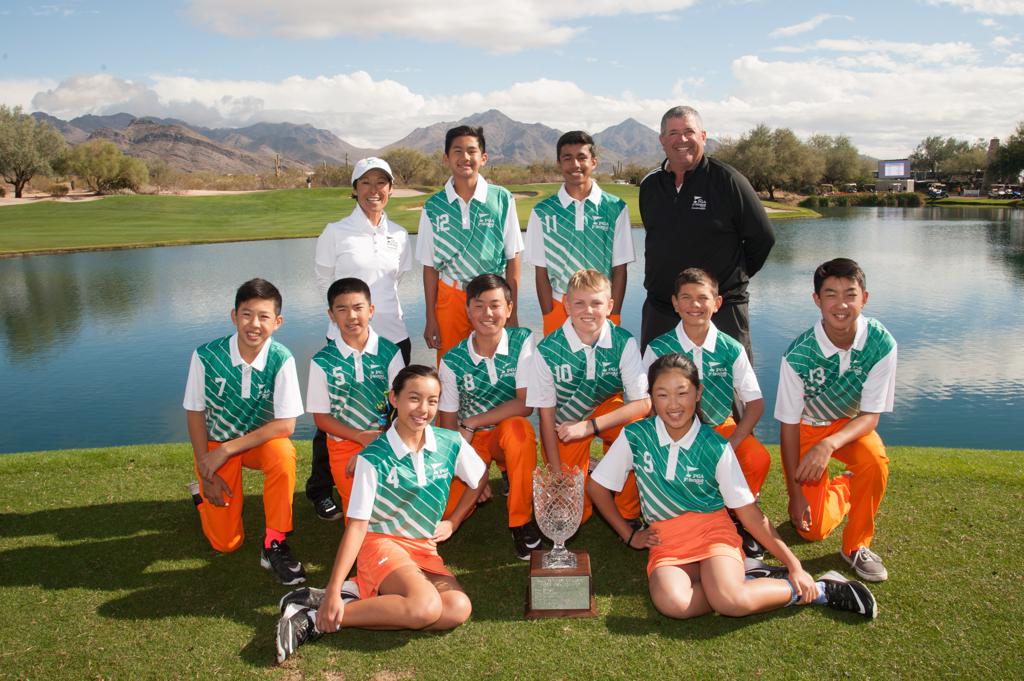 The All-Star team from Las Positas Golf Course in Livermore, California, raced out to an early lead Monday morning and never looked back. Team California’s Aidan Tran, 12, set the tone off the bat with a birdie putt to open the first match. Through the first three holes, Team California led Team Georgia by 3 points, needing just 3.5 more over the next six holes to clinch.

With a rare desert storm fast-approaching, California locked up the win on the par-4,  305-yard 6th hole with a championship-clinching, 3-foot birdie putt by 12-year-old phenom Alice Liu. Despite earning the magic half-point that put California mathematically over the top, Liu was unaware at the moment of the putt’s significance.

“When I was setting up to the ball, I just wanted to make it,” said Liu. “When everyone started jumping and cheering, that’s when I realized it was the winning putt.”

This is the second PGA Junior League National Championship title for a team from Las Positas (2012), which also finished second in 2013.

“These kids fight,” said Team California Captain Jeff DeBenedetti, PGA Director of Golf at Las Positas. “They grind. They go after it.”

Team Georgia, who lost in a heartbreaking playoff against Team California (San Diego) last year, played with good spirit Monday, despite knowing they had lost the match early on.

“The kids played great [throughout the championship],” said Team Georgia Captain Tom Joyce, Jr., PGA Director of Player Development at Crooked Creek Club in Alpharetta. “We had a game plan going into it. The first couple of days we made putts. Today, we couldn’t get the putts we needed to fall.”

Cheers of “Go Las Po!” rang throughout the course all Monday morning from the families of Team California. “They heard the cheering, and they kept going because they knew it was for them. It was fun to watch,” said DeBenedetti.

Team California’s two girls on the squad of 10 players—Madison Wu, 13, who fought off an illness yesterday and returned to compete in the National Championship, and Liu— shined throughout the competition, with both girls making key putts in match after match.

Drew Kim, 13—who sent Team California to the 2016 National Championship after sinking a make-or-break clinching putt during the PGA Junior League Golf Western Regional at Chambers Bay in September—played on the 2012 team at age 9. By the age of 13, he already has two national championships to his name.

“Drew has always been a solid player,” said DeBenedetti. “Drew’s golf age is about four-to-five years older than his actual age. He’s a competitor. It’s great for him to work for four years, and get back.”

The state of California has had teams win the PGA Junior League Golf National Championship in four of the five years of competition. Teams representing the states of Georgia and California have made it to the finals all five years, with Georgia winning in 2013.

“I’m just proud of them,” said Georgia Captain Joyce. “If you look at the overall accomplishment of it, especially for us to have six kids return from last year and make it to back-to-back national championships, it’s an experience they will take away forever.”

Team Ohio edged Team New Jersey 6.5 to 5.5 in the third-place match. Team Connecticut beat Team Texas 8 to 4 in the fifth-place match, while Team Alabama won the seventh-place match 7 to 5 over Team Illinois.

“Golf is really a special game,” said PGA President Paul Levy during the Awards Ceremony. “The winner is the game of golf.”

“It’s incredible what you accomplished the last four days,” added Golf Channel’s Ryan Burr, who emceed the awards. “These kids have a chance to be significant…Being significant can last a lifetime.”