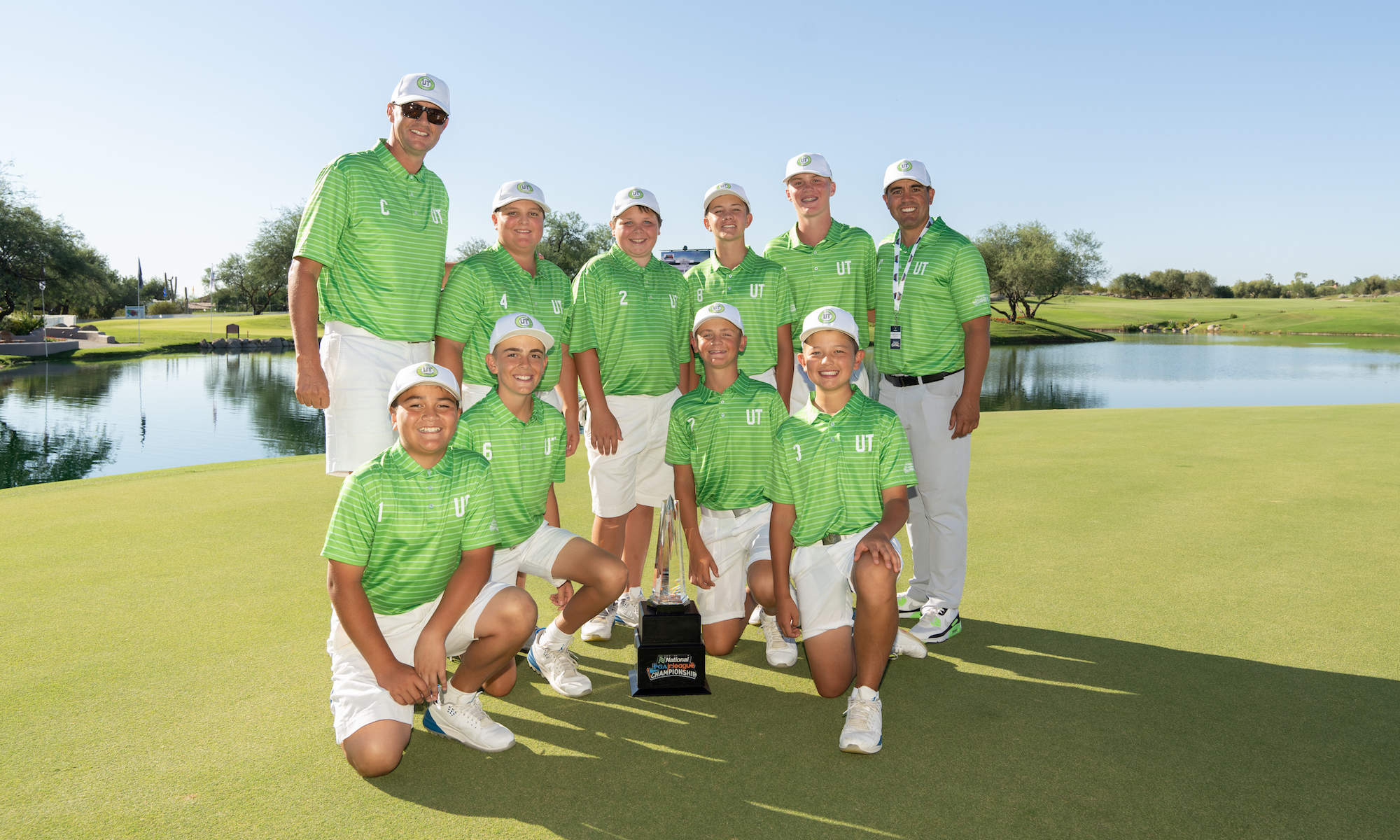 Scottsdale, Ariz. (Oct. 10, 2021) – Ryder Huish stood over his ball in the 18th fairway, half of his Team Utah (Lehi) teammates waiting for him near the green with the 2021 National Car Rental PGA Jr. League Championship waiting to be secured.

Adding to the pressure, Huish’s teammate’s ball had found the water near the green seconds before. So Huish grabbed his 5-iron from 180 yards, landed the ball on the front of the green and watched it roll out … and roll out … and roll out, until it came to rest inside 10 feet from the hole, putting Huish and teammate Austin Shelley, 13, from Salt Lake City – and their six other teammates – in position to lock down the title.

After two-putting the par 5 for birdie minutes later, the Championship belonged to the team from Utah with a 7.5-4.5 win over Team Connecticut (Torrington) at Grayhawk Golf Club on Sunday afternoon, which aired live on ESPN2.

As Huish walked off the green after putting out to win, his teammates mobbed him in celebration. 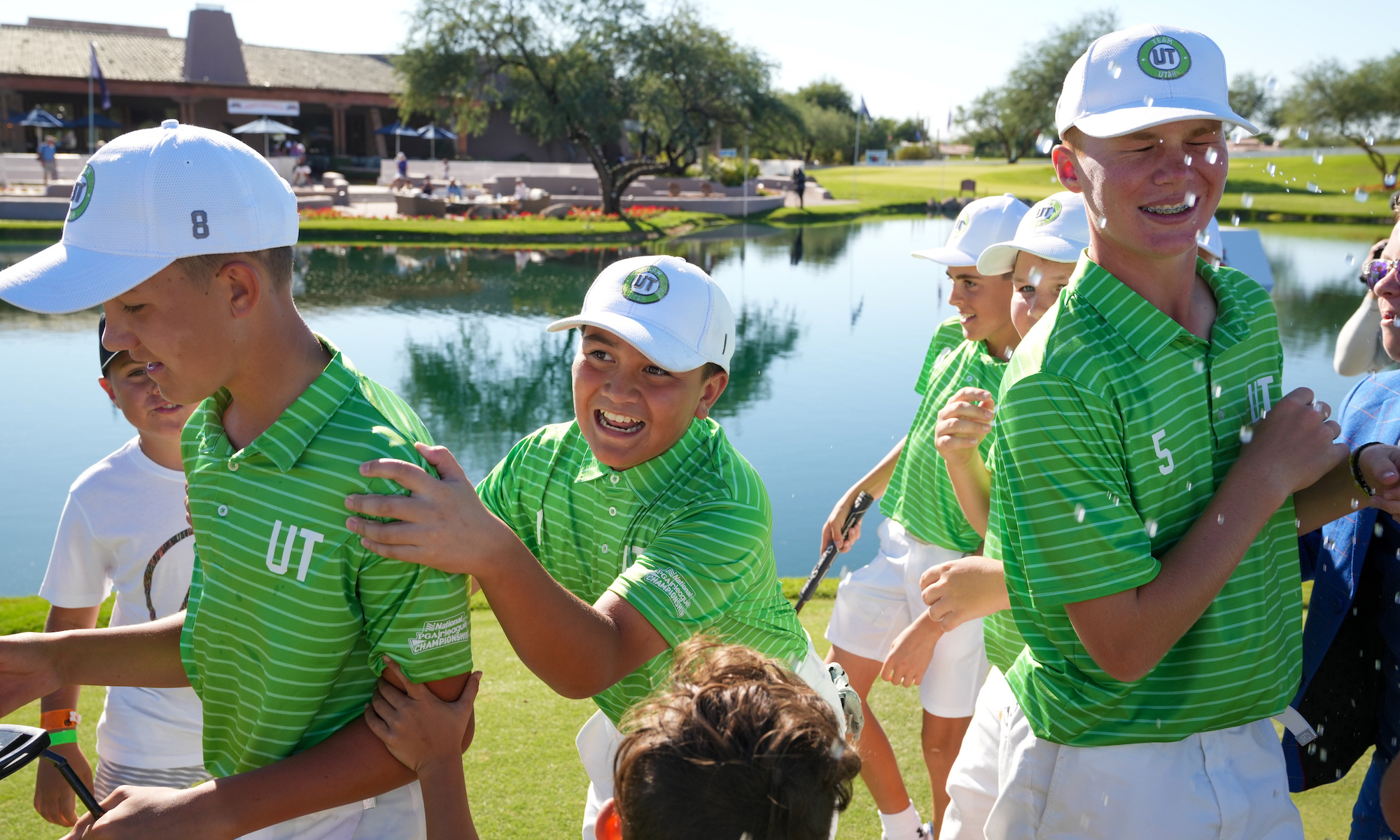 This was Utah’s PGA Jr. League Championship debut, and after taking the third seed into Sunday’s match-play semifinals, it knocked off No. 2 Team Oklahoma (Broken Arrow) in the morning before defeating No. 4 Connecticut.

“Oh my goodness, it was just amazing,” Utah Captain Tele Wightman, PGA, said. “You’ve got Oklahoma, Florida, Connecticut … such good teams, but we really believed in ourselves and felt like we had a team that could get it done. Then you are watching [the match unfold] and you think, this could be happening. The shots they pulled off towards the end, it’s amazing.”

Connecticut took the opening match of the finals, but after that Utah ran the table. The positive momentum started with the second match when Jordan Ofahengaue, 11, from Lehi, put on a putting clinic late in the round. On the par-3 16th, he rolled in a 15-footer to put him and teammate Jaxon Erickson, 14, from Riverton, 1-up.

“My partner told me [the read], actually,” said Ofahengaue. “I had something else, but I thought his line was better. So I putted it and it went right in.”

On No. 17, a short par 4, Utah put its tee shot just short of the green, but Ofahengaue and Erickson both hit so-so chips that left them with about 20 feet to the hole as Connecticut was in close for a birdie look.

It looked like Connecticut was in position to tie the critical second match at that point, but Ofahengaue again stepped up, read his line, and struck a pure putt that dropped in the center of the cup. That essentially secured their match win, and eventually set up Huish’s approach shot to be the clincher.

Also Read: Between Grandpa and Tony Finau, Jordan Ofahengaue is Keeping it All in the Family

Ofahengaue’s “uncle” is Tony Finau, who is cousins with Ofahengaue’s father, Kelepi. Finau spent his afternoon tuned into ESPN2 watching the live coverage, tweeting and posting on Instagram.

“My man Jordan balled out to help Utah win! Proud of him,” Finau tweeted. After the match ended, Finau FaceTimed the team and told them how proud he was of what they had accomplished minutes earlier.

“He was so proud of us,” Wightman said. “We have incredible support back home and all around, and it was cool to get a phone call from Tony.”

So fun watching these Jr's tear it up on both sides! https://t.co/PZBv1OYKDZ

NO. 2 OKLAHOMA DEFEATS NO. 1 FLORIDA FOR THIRD PLACE
Oklahoma and Florida finished the first six holes of their nine-hole match tied, but came on strong on the final three holes. It won three of the four matches down the stretch and halved the other to secure their third-place finish.

INAUGURAL RAPTOR SHOOTOUT CHAMPIONS
Players on the eight other teams competing in the PGA Jr. League Championship that did not qualify for the semifinals were given the opportunity to participate in the inaugural Raptor Shootout on the front nine, while the final four teams competed on the back.

The two-person scramble event was captured by Matthew Lim, 14, and Daniel Chang, 13, from Team Illinois. They shot a 7-under-par 29, winning a scorecard playoff against Team California’s Mia Clausen, 11, and Connor Szczechowicz, 12, thanks to their birdie on hole No. 8.