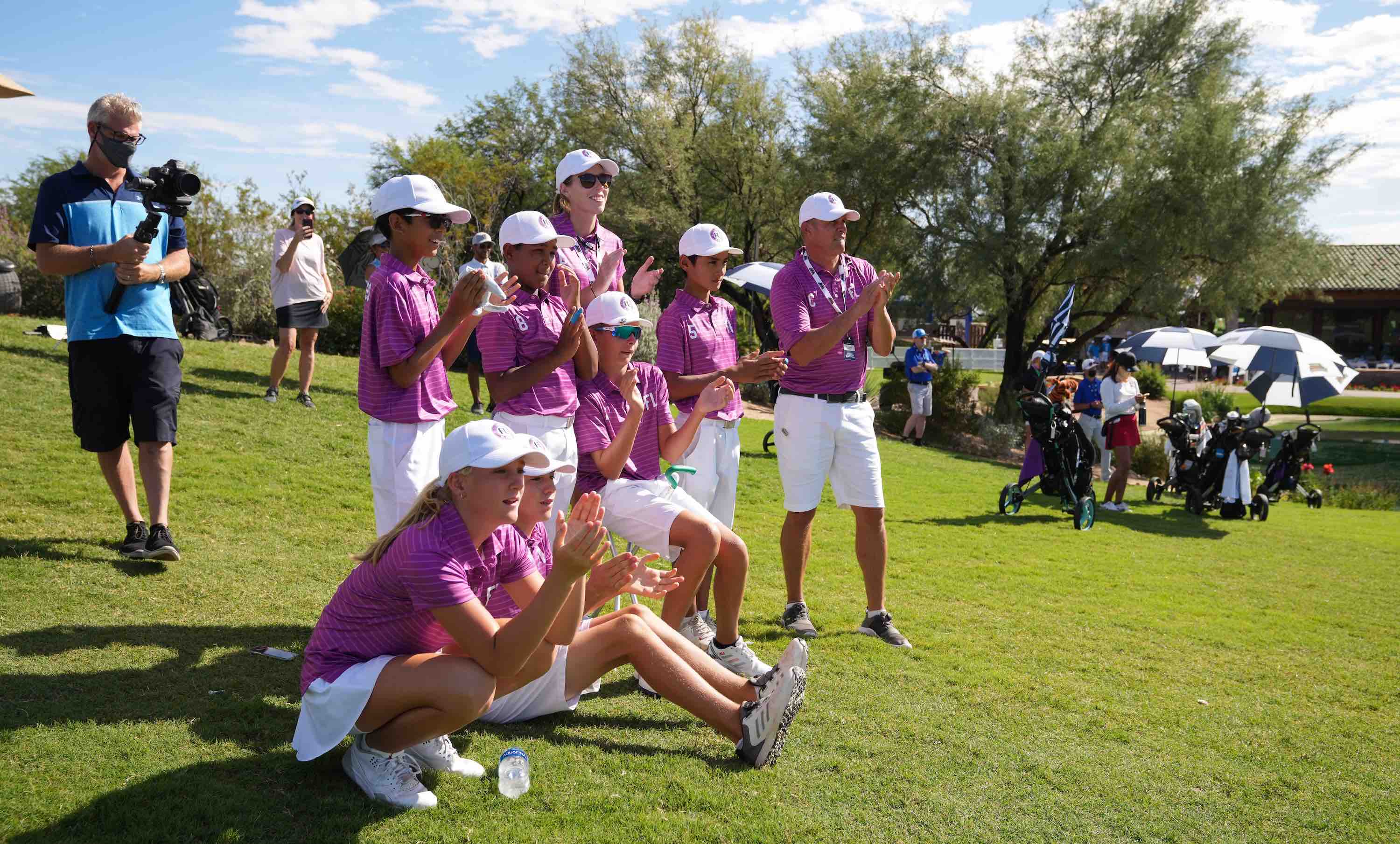 SCOTTSDALE, Arizona (Oct. 9, 2021) –– One team has been here before, losing out on a shot at the national title in 2019. The other team’s inaugural trip to the 2021 National Car Rental PGA Jr. League Championship has been years in the making.

After being tied through the first tiebreaker, Team Florida secured the No. 1 seed over Team Oklahoma utilizing the second tie-breaker: Saturday’s 18-hole team aggregate total for all four pairs.

Similarly tied for the third seed at 45 under through two days, Team Utah’s (Lehi) took the third semifinal spot over Team Connecticut (Torrington) by virtue of a single tiebreaker: the 36-hole team aggregate total for all four pairs.

As a result,Team Florida will take on Team Connecticut in one head-to-head match play semifinal Sunday, and Team Oklahoma will face Team Utah in the other. The third-place and Championship matches will air live on ESPN2 from 4:30-6:30 p.m. ET.

Team Florida rocketed up the leaderboard, but that doesn’t mean they were looking at it.

“We hear it all the time at the professional level,” said Team Florida Coach Jeff Beaver. “You spend your whole career telling your player you're in contention, but don't look at it. Just play your ball. [We tell the kids] there’s no video game on that TV. Get out of here and go play.”

Team Florida Captain Cori McAuliffe shared her excitement for the experience that before this weekend had been just a dream.

“The entire experience, we’re all beyond blessed just to be here,” said McAuliffe. “To be going into the last day as the No. 1 seed, that’s amazing and I’m proud of everyone.”

Florida’s Bella Dovhey, 13, from Orlando, and teammate Chloe Chang, 14, from Sarasota, went 10 under for the day. They’ve proved their partnership to be a winning formula.

“My partner Chloe made five putts over 15 feet in a row starting on hole eight, so that really turned us on,” said Dovhey. “We played really well after that. I had a lot of good drives and some pretty good approach shots. She did most of the putting, and I gave her the read.”

“The second time around, we’ve come to win,” she said.

“We have to make sure that the kids are patient, we will get the birdies when we get them and not get too upset when we don’t,” added Fisher. “Match play is going to be completely different. We have to get in the mindset that now we are going head-to-head, and if we have a bad hole to brush it off and focus on the next one.”

Oklahoma’s rounds today were highlighted by two stellar eagles, both carded by different pairings on hole No. 18: Evyn Cannon, 11, from Edmond, drained a 40-foot putt alongside her cheering teammate Harrison Shaw, 13, from Tulsa. Then Chase Jones, 14, from Oklahoma City, sank his with help from teammate Emerson Majma, 13, from Edmond. Both Cannon and Jones emphasized how important their partners were in setting up the perfect putt.

“I give most of the credit to my partner for giving me the read,” said Cannon. “He told me where to play it, and I was focusing on speed. If I had the right line and the speed was good, I would make it. Everybody was yelling and screaming!”

“My partner Emerson hit a great drive, I hit my 3 wood to five feet and we made the eagle putt,” Jones recounted.

Team Utah, who joins Team Florida as fellow rookies in the top four seeds, also brings an upbeat presence to the Championship. That excitement reverberates from the whole team.

“Holy cow, my insides are still [buzzing],” said Team Utah Captain Tele Wightman, PGA. “We talked last night about getting off to a hot start. We knew we were starting on the front nine and we felt the front was the easier nine. And they came out blazing hot. We hit a little lull, but they were so clutch coming in. Every team birdied 18. They just played awesome.”

Team Connecticut is making its third consecutive Championship appearance under the leadership of Captain Bob Sparks, PGA, and Coach Jim Bunel. “We hung in there,” said Sparks. “It wasn’t our best stuff, but we hung around.”

“Our putts didn’t drop but we drove pretty well,” said Team Connecticut’s North Chery, 14, from Monroe, who is notching his fifth Championship appearance spanning two Connecticut teams. “I think we both only missed two fairways combined. Robby [Rosait, 13, from Stratford] drove well and I drove well.”

Make no mistake: the excitement, teamwork and incredible golf from the Saturday competition reached beyond the top four seeds.

Team Minnesota (Blaine; T9) is also on their third trip to the Championship, finishing as high as runner-up in 2018. Led by Captain David Branstad, PGA, with support from Coach Tony Serpico, PGA Associate, the team saw not one, but two, aces today. The roars were heard from around Grayhawk Golf Club twice.

“It was pretty exciting,” said Kongshaug. “I was kind of shocked. Obviously I didn’t think it was going to go in. It’s pretty cool. It’s my first hole-in-one.”

The second ace was made by 12-year-old Chase Birdwell from Blaine, from 130 yards on No. 8 with an 8-iron. This was Birdwell’s second hole-in-one, and both have occurred at a PGA Jr. League competition. His first came in 2019 at the Minnesota PGA Jr. League Section Championship on a par 4.

“Two holes-in-one in one day is cool, but it was really cool that it was on the same team,” said Birdwell, who was so excited he tossed his club in the air and left it on the tee box. “That doesn’t happen a lot. Like, never.”

Chase Birdwell dunks it on the par-3 8th!! pic.twitter.com/WsUjg0KYYV

Rich Birdwell, Chase’s dad, was ecstatic following his son’s ace, which was captured in all of its glory live on ESPN+. Afterward, ESPN invited Chase into the broadcast truck to watch the replay.

“The whole experience has been awesome,” said Rich. “We love the team part of it, the numbers and the coaches. It’s a good experience for him on every level. It’s been awesome to meet new people. You can’t ask for a better experience at his age, too.”

Live coverage concludes tomorrow from 4:30–6:30 p.m. ET on ESPN2. The top four seeds will play the Semifinals on Sunday morning for the right to play in the Championship Match on Sunday afternoon. The two teams that do not make the finals will play in the third-place match.

CUB REPORTER KICKS IT ALONGSIDE ESPN TALENT
13-year-old Warren Fisher is here for this third year of Championship reporting, right at home with ESPN’s Suzy Whaley, Michael Collins, Andy North, and Taylor Zarzour. His antics (and reporting) can be seen on PGA Jr. League’s social media channels this weekend: @PGAJrLeague on Facebook, Instagram and Twitter.