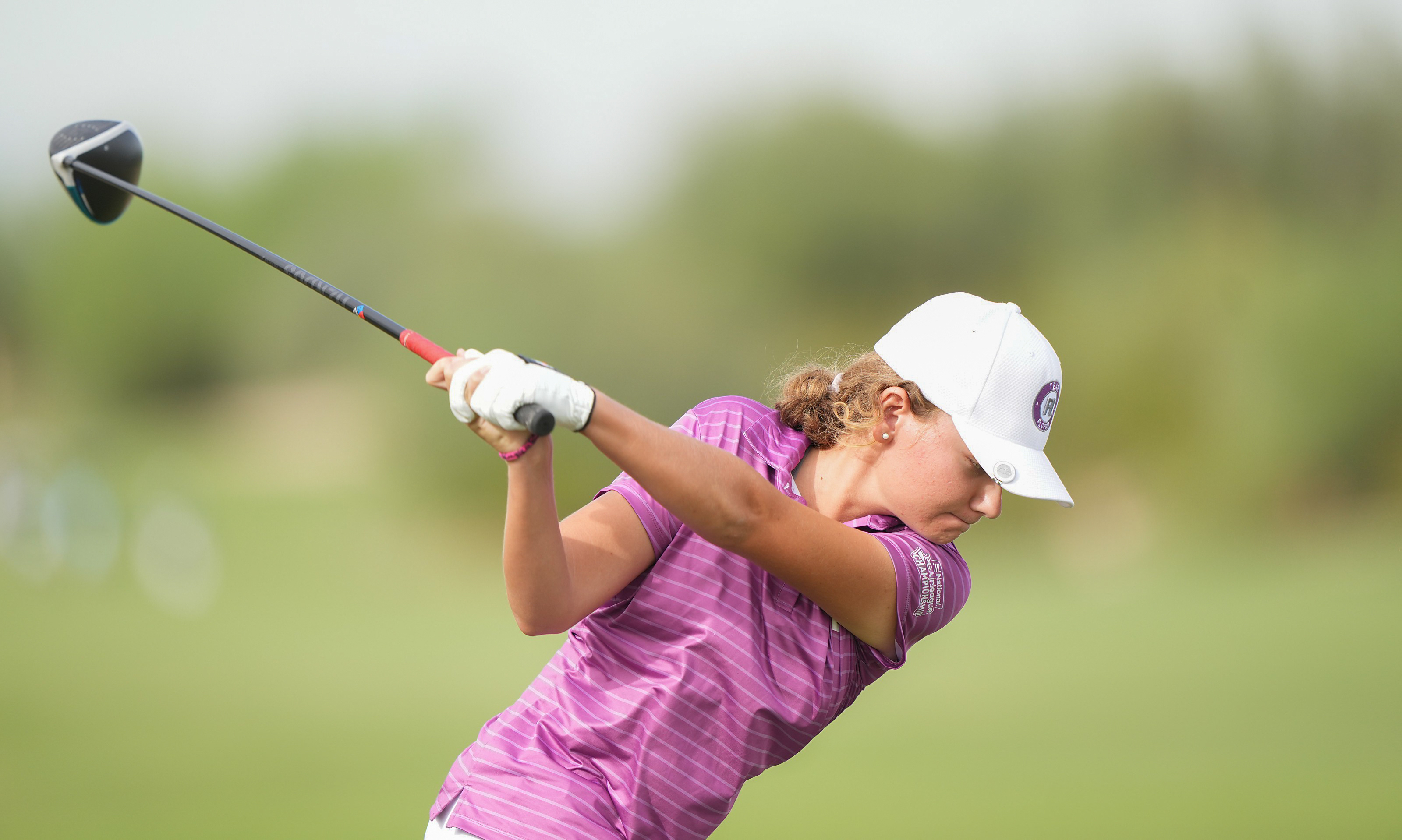 If you hang around the sportswriting business long enough, you will likely interview some superstars along the way. Just ask any reporter their favorite interviews, and they’ll rattle off an amazing story.

And 13-year-old Bella Dovhey of Orlando, Florida, can do the same, with the likes of Arnold Palmer, Barbara Nicklaus, Sergio Garcia and Jerry Rice on her interview resume.

Sprinkle in impromptu meetings with Jack Nicklaus, former Homeland Security Secretary and past Pennsylvania Governor Tom Ridge, and actor Alfonso Ribeiro (“Carlton” from Fresh Prince of Bel Air - yes, that Carlton), and it’s a who’s who list that could take ages for anyone to accomplish.

And Bella was first published five years ago at age 8!

An accomplished golfer who will represent Team Florida on ESPN2, ESPNews and ESPN+ this weekend at the 2021 National Car Rental PGA Jr. League Championship at Grayhawk Golf Club, Dovhey hit the sports writing jackpot when she was asked to write for Florida Golf Central magazine. Publisher Terrie Purdum would ask Bella to interview golfers who would come to their golf club.

“She was given free reign on her interviews,” said Bella’s father Mike Dovhey, a helicopter critical care nurse on the front lines of the pandemic for Advent Health. “Terri would make things happen. You could see Bella approach them and engage in questions.”

"Bella Dovhey is an incredible human being, she's a [golf] player, and her personality and charming ways stole my heart and Arnold's, too,” explained Purdum. “She wrote some ‘Young Gun’ stories for Florida Golf Central and attended many events on behalf of the magazine. I always told her, ‘Play golf for fun, you're gonna be on camera someday. So don’t stress. Just be Bella.’”

Along the way, she got some golf and life advice from the sports legends.

A couple of these events, she won three times each, including one by 18 strokes!

“They helped me, and it gives me confidence,” added Bella. Enough confidence that she made the local high school golf team as a sixth grader.

Just months before he passed away in 2016, Bella met Palmer at his legendary Bay Hill Golf Club. Bella asked Palmer questions, and Ridge would assist.

Dovhey told Palmer a story about how she met Barbara and Jack Nicklaus. By then, Bella had developed a bond with Barbara that would lead to them walking the last few holes of the PNC Father-Son Challenge together. 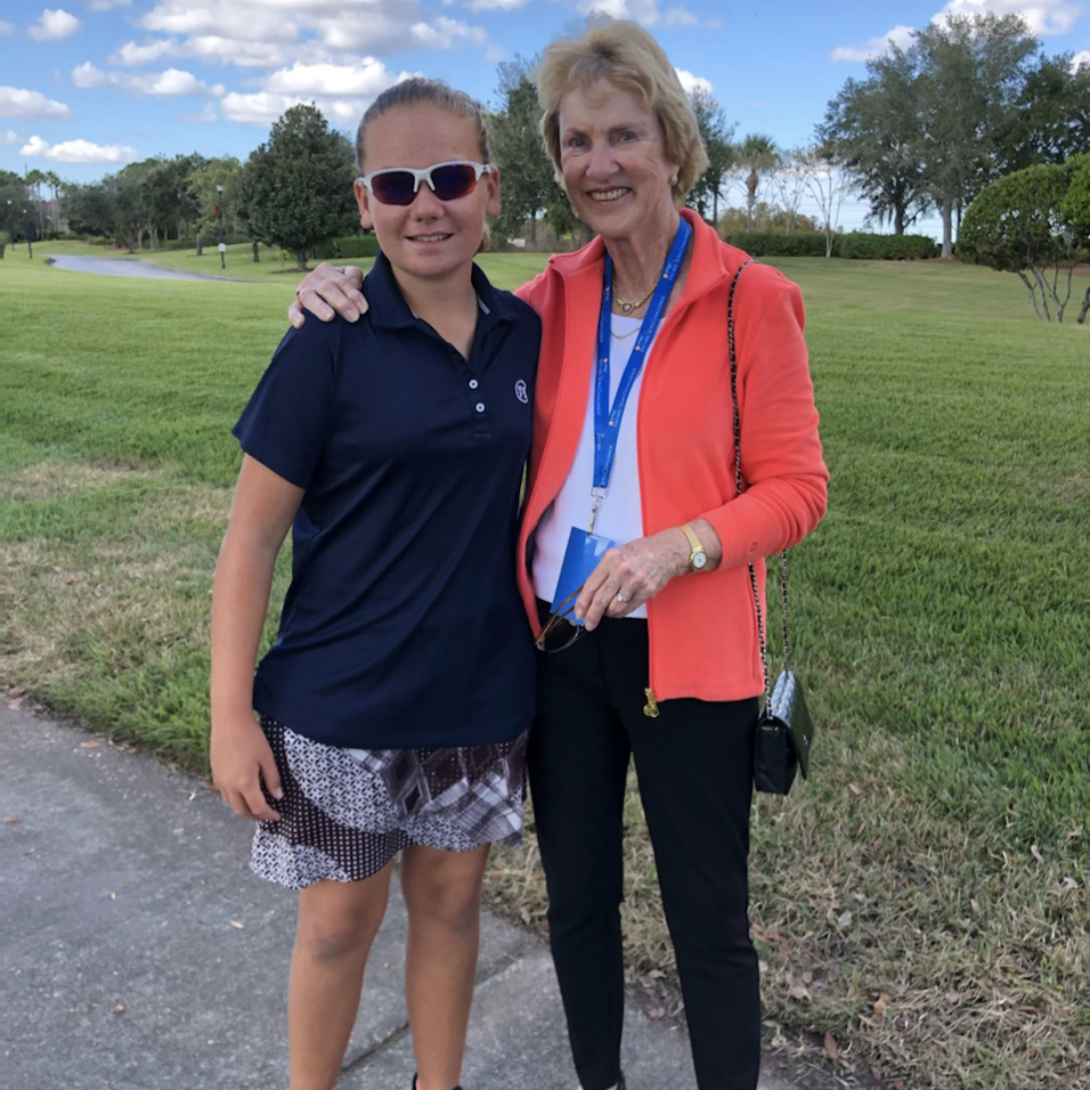 Palmer joked with her, “Jack Nicklaus? Who’s that guy? You know him?”

Bella asked Palmer who taught him how to play golf at such an amazing level. Palmer quickly pointed to his dad and legendary PGA Member Deacon Palmer.

By the end of the conversation, Palmer gifted Bella a large ball marker that celebrated him being awarded the Presidential Medal of Freedom, which she has used in tournaments.

It wouldn’t be long before Bella wrote a handwritten story and had it published as is in Florida Golf Central. A short time later, she met Palmer again and showed him the article.

“He loved her story,” said Mike. “These were really precious moments for a young girl at 8-years old. It was really special.”

“We realized we couldn’t keep juggling this,” said Bella’s mom, Pearl Dovhey, an ER nurse for Advent Health. Pearl and Mike balanced a life that included one working night shift and the other the day shift.

Yet, Bella still has a treasure chest of memories of her career as a young scribe and a top-notch junior golfer.

“I didn’t really expect it,” said Bella, who explained her reaction when she was first told she would meet with Arnold Palmer. “I thought they were joking.”