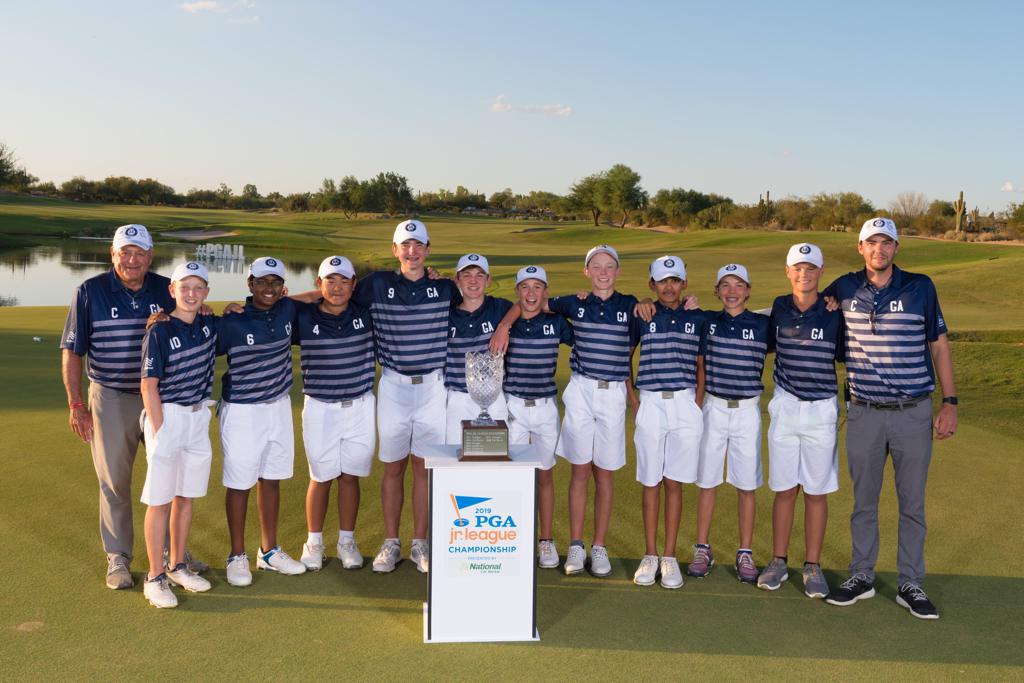 SCOTTSDALE, Ariz. (Oct. 14, 2019) – Team Georgia’s journey through the 8th PGA Jr. League Championship presented by National Car Rental can be summed up in four words—rally in the valley.

The now two-time National Champions Team Georgia (Duluth/Atlanta, 2017, '19) came back from a stunning Divisional loss to then winless Team New York to defeat undefeated Team California to first capture the Wanamaker Division title; and then the National Championship over Team Texas (Houston/Montgomery) 7-5 at Grayhawk Golf Club.

Georgia’s Brody McQueen, 11, clinched the Championship with an unthinkable 25-foot putt for eagle  on the par-4, 325-yard Hole No. 8. Paired with teammate Sahish Reddy, 12, McQueen drove the green, setting up a putt he will remember forever.

“After the drive, I was so pumped,” said McQueen. “Sahish’s putt didn’t go in. I needed a little bit of extra line, and it was the perfect speed. That was one of the best putts I’ve made in my life. The atmosphere was so crazy.”

With the score 6-4, it was Team Georgia Captain Patrick McCrary who came over the radio to tell his Coach Greg Powers that all they needed was a half-point to claim the title.

“Little did I know, that Brody McQueen would slam dunk his drive and knock his 25-foot eagle putt right in the middle of the hole,” said Powers.

It was glory, glory to ole Georgia.

Georgia and Texas were neck-and-neck at the start of the day, finishing up their first flag (Hole Nos. 1, 2 and 3 in the 9-hole game) with Texas holding the cards for a one point lead. This was thanks in part to a monster 40-foot birdie putt by Marek Fleming, 12, that took a hard bounce on the back of the cup and miraculously dropped in.

However, Georgia began breaking away in the second flag, taking the team up 5-3, as McQueen outdrove his Texas counterparts Austin Hofferkamp and Fleming by 100-yards on Hole No. 6, followed by a perfect 30-yard flop shot and a foot-long birdie putt, to set Georgia’s wheels in motion.

“They put it out there,” said Team Texas Captain Ben Willman, PGA. “They didn’t leave anything behind. We made a couple of mistakes, but I am proud of how hard the kids played. They just came up short. We have finished the last three years in 4th, 3rd and 2nd place… Maybe next year is our year.”

Billy Abdow, the only returning player from the 2017 National Champion Team Georgia, is the Player Captain of his team. And he has some simple advice for his teammates as he ages out of contention for the next postseason.

“I’m going to tell them to go out and do it again,” declared Abdow.

“The third place match was a great one,” said Team California Captain Jim Collins, PGA. “Our putters went cold today versus Georgia. We just couldn’t convert this morning. Still, Team California is very happy with our 3rd place finish. Kudos to Georgia on winning it all and winning the 2019 PGA Jr. League Championship.”

Division Clinchers
Monday morning’s critical head-to-head match-up in Georgia’s Wanamaker Division would determine who between Team Georgia and 2014 National Champions Team California (San Ramon) would advance to the Championship game. It was 14-year-old Freddy Chappell who walked in a 15-foot birdie putt to clinch his team’s Championship berth.

A two-hour highlight show will debut on ESPN2 on Sunday, Nov. 3 at 3 p.m. EST/12 p.m. PST. ESPN is the new broadcast network of the PGA Jr. League Championship presented by National Car Rental.