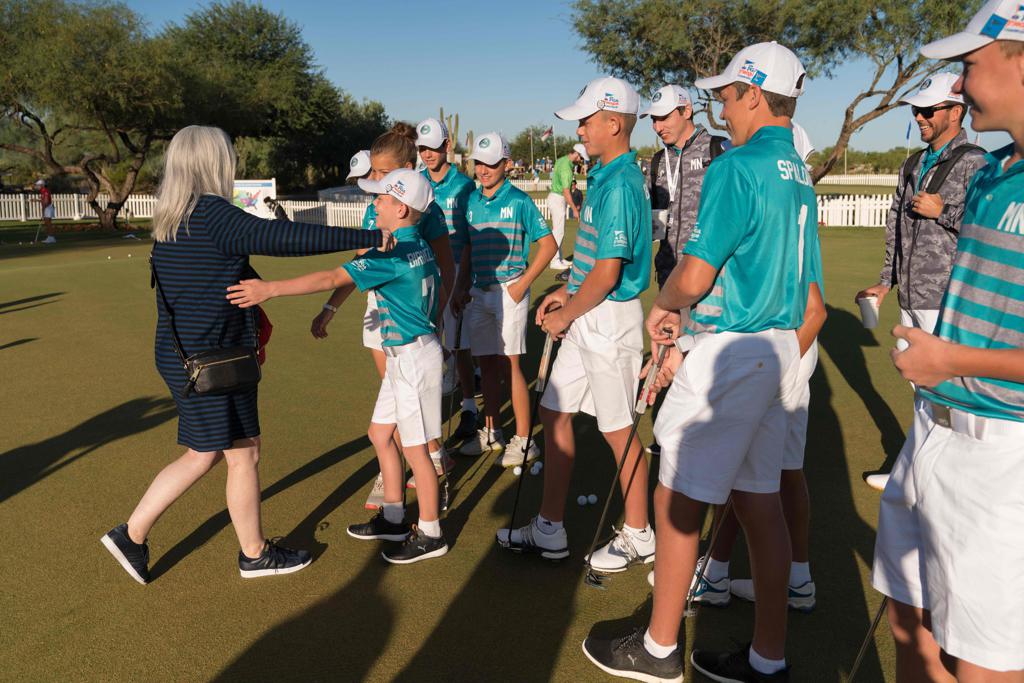 SCOTTSDALE, Ariz. (Oct. 14, 2019) - Some wins just mean more than others, and that’s certainly the case for Team Minnesota, who is back in the PGA Jr. League Championship presented by National Car Rental for the second consecutive year.

“It’s awesome to be back,” said Team Minnesota Captain Tony Serpico, PGA Associate. “Just the experience for these kids is great. That was our main goal this year, to be here again.”

A major feat in itself—being one of 12 teams and over 60,000 boys and girls to make it to PGA Jr. League’s grandest stage at Grayhawk Golf Club—didn’t come without some adversity for Team Minnesota. And not the kind of adversity a Coach or Captain can help remedy through a swing lesson or pep talk; the kind that no person, let alone kid, can really prepare for.

This past spring, Director of Instruction at TPC Twin Cities, Team Minnesota’s home course, and PGA Jr. League Captain Jay Norman, PGA, passed away suddenly. While grief ran its course for the players, parents and surrounding golf community over the days and months leading up to Regionals, Team Minnesota’s purpose became a lot greater.

At the 2019 PGA Jr. League Section Championship at Stone Ridge, not long after Norman’s death, Coach Serpico and the players sprinkled his ashes on the PGA Jr. League logo painted onto the grass. It was a tribute to their late coach and a way of honoring him for all he did for their PGA Jr. League program and the game of golf as a whole.

“Jay meant everything to our team,” Serpico said. “He’s the one that started PGA Jr. League at our course. He loved these kids, and they meant more to him than anything. They all respected him so much—it was just cool to see those relationships build over time.”

Although Jay’s presence for Team Minnesota is different than a year ago, the results have been just as impressive. Today (Oct. 14), on the final day of the Championship, an inspired Team Minnesota is hopeful of back-to-back Championship appearances and still in the mix to do just that—with their beloved coach at the forefront of all their minds.

After wrapping up the first two sessions undefeated on Saturday (Oct. 12), with wins over Ohio and North Carolina, Minnesota was topped by Texas, who shot an impressive 22-under, in Session 3 Sunday morning (Oct. 13). They bounced back with another win over Louisiana that moved them to 3-1 overall and second behind Team Texas in the Ryder Division, setting them up for another dramatic run at the title.

“They’ve all struggled through it obviously,” said Serpico, who stepped in as Captain after Norman’s death. “There have been some ups and some downs, but you can just tell they all want to play for him here. He meant so much to them all. They really want to win this Championship for him.

If there was anyone who could ‘stand in’ for Jay at the PGA Jr. League Championship presented by National Car Rental, it would be his wife, Jennifer Norman, who attended her son’s wedding the day before flying to Arizona to catch Minnesota in action. She landed on Sunday night (Oct. 13), and less than 12 hours later, was at the course to surprise the team and cheer them on to victory.

“It’s unbelievable to be here,” Jennifer said. “My husband had so much faith in this team that they were going to be here this year. It’s amazing that he had that foresight and that faith in them. Jay was all heart. And all love. He was prouder of these kids more than anything.”

Jay surely had a lot of faith and a lot of confidence—something he helped instill in his players. For one player in particular, Jay was the reason he even made the PGA Jr. League team to begin with. Lisa Ramos, mother of Andrew and Colin Ramos, witnessed first-hand the legacy Jay left behind.

“My youngest son [Colin] was the most impacted,” Ramos said. “Jay really was the one who got him to play golf and gave him the confidence that he could be on the team. Colin watched my oldest son [Andrew] play in this Championship last year and that was a turning point in our house for him wanting to play golf. Jay told him he was good enough to make the team and could make the team if he worked really hard.”

When it came down to a playoff for Colin’s ticket to officially make the team, it was quite simple how he did it.

For others, Jay was a model of integrity and man of character. The kind of guy you want your kid to look up to.

“I didn’t know Jay as well as some as some of my teammates, but he taught me a lot,” Minnesota team member Sam Udovich said. “He taught me sportsmanship and courage and to always try your best. He said to never put your head down even if you hit a bad shot.”

You can almost guarantee Minnesota will be holding their heads high when all is said and done. It was a season of ups, downs and the unexpected, culminating in a second straight PGA Jr. League Championship appearance. But it’s safe to say the most important lessons learned in 2019 were ones much bigger than golf.

The 8th PGA Jr. League Championship presented by National Car Rental continues Monday (Oct. 14) morning, with the final session of divisional play. On Monday afternoon, the top team from each division will compete for the national title, and the 2nd place teams from each division will vie for 3rd place. In current standings, Team Minnesota currently sits in 2nd place of its Ryder Division with a 3-1-0 record and 25 points.

Live scoring, standings, stories and updates can be found here.